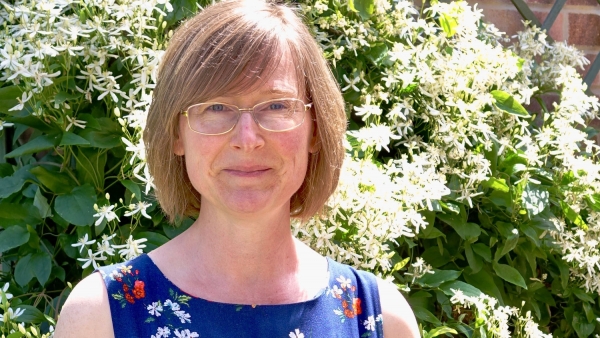 Rachael Brooks: to be ordained deacon in 2020

Do I need to wear a collar in order to be the bridge God is calling me to be?

My name is Rachael Brooks and I live in Derby with my husband, Andrew, and our son, Isaac.

I encountered God and gave my life to him at the age of 14.

Soon after, I experienced a sense of calling, although I didn’t recognise it as such until much later.

I met my husband, Andrew, at Nottingham University.

We both got jobs in Derby, me as a teacher at a junior school in Chaddesden and Andrew as a doctor on the Derby hospitals’ GP training scheme, so moved here when we married, in 1991.

We quickly found ourselves at the church which has been our home ever since - St Alkmund’s, Derby.

This is the place where my faith has deepened and matured, where I’ve found and given prayerful companionship through the ups and downs of life.

It has provided many roles in which I could serve and develop the gifts God had given me.

A few people over the years suggested I consider ordination but I always dismissed the idea that God was calling me to that.

I didn’t see myself leading a church.

In 2013, I was strongly advised by someone I looked up to to ‘have a go’ at Chaplaincy and, if I liked it, to explore ordination.

I started a voluntary role with Derby City Centre Chaplaincy in 2014, serving at a vocational training college for a few years and then at the council building.

This chaplaincy role seemed to fulfil what prayer had begun to reveal was my calling: to be a bridge - between God and the community.

A friend had a picture of me as a sparrow around this time.

The particular quality she felt God was drawing attention to was that sparrows alight gently, unobtrusively.

She was a bit apologetic, sparrows aren’t the most beautiful or rare of birds.

But I began to see that this also fitted with being a bridge: finding the people he wants to me to alight gently beside and to show his love.

The issue for me in considering ordination was ‘do I need to wear a collar in order to be the bridge God is calling me to be?’.

As I prayed and reflected I remembered those moments during chaplaincy in which I found myself thinking how I’d love to be the one to baptise the people I was walking alongside. Diocesan and national selection panels eventually ensued and I began training in 2017.

During my training at St Hild Theological College, God has stretched and challenged me further.

He’s done this through the rich community life among the students and staff and through precious times of worship: at the Sheffield site, at Mirfield and at Durham cathedral.

And through my church placement.

My calling was confirmed beyond question for me at the funeral of Rev’d Ian Mountford, in January, when in her address, Bishop Jan told us something I didn’t know - that the word ‘priest’ means ‘bridge’.

I’m so pleased to be undertaking the curacy phase of my formation adventure at St Peter’s, Littleover - the parish we happen to have lived in for most of the 29 years we’ve been in Derby - and St Andrew’s, Blagreaves.

Starting during lockdown is rather disconcerting, but it’s an opportunity to learn new skills and work creatively with God and the Church to bring the peace, love and freedom of God into a unique situation.