Huge numbers of visitors come into the church at Eyam, mainly drawn by the story of the heroism of the people at the time of the plague. In our Mission Action Plan we said we would like to turn tourists into pilgrims. So we had the idea of devising a pilgrimage walking route through the Peak District, ending in Eyam. It starts at Ilam, itself an historic pilgrimage destination, and winds on footpaths through some of the best scenery in the National Park. It’s a three to four day walk, ideally with overnight stops, though locals could knock off a section at a time if they preferred.

We have about a dozen partner churches along the route that pilgrims are invited to spend time in, getting their guide stamped and picking up a Bible verse that explains something of the Christian faith. When pilgrims arrive in Eyam they find that, led by William Mompesson the Rector, the people decided to lock themselves down in the village once the plague had arrived rather than escape and risk spreading it around the whole area. About a third of them died as a consequence. Offering your own life so others can live is a marvellous Gospel story as the climax to a pilgrimage.

The walk is designed for anyone – it’s not too demanding physically. It can just be enjoyed as a walk, though we find that most people take the spiritual dimension of the journey seriously. It seems to work for Christians and non-Christians alike, and is particularly appropriate for people who are spiritually searching. We’ve had great feedback so far and think we’re on to something!

We launched the Pilgrimage in July 2015 to commemorate the 350th anniversary of the plague but it is intended to be a permanent feature and we are trying steadily to build it up. This year we’re producing a publicity leaflet and developing a waymarking system. And we have had quite a lot of media interest. The main way to find out about it is to check out the website – www.peakpilgrimage.org.uk. From the website you can order the guidebook that you will need for the pilgrimage. I hope you’ll find it’s a good read even if you never shift from the fireside!

The wonderful countryside and the open churches are both key to the success of the Peak Pilgrimage because we are inviting people to let creation, the world around them including its inspiring church buildings and amazing history, speak to them about God and their relationship to him. We have a unique story in Eyam to help us do this, but other places speak in their own unique way as well. How can you use what you have around you to help people walk their spiritual pilgrimage and meet the living God?

Genealogy and Churches - Obligation and Opportunity

The Church of England finds itself in the position of being the source of genealogical data through its births, baptism, marriage and burial registers.  In most places the older records are deposited with city and county archivists however the records are still the property of the originating church and they can request copies for local retention. Many of the records are now searchable through on-line means such as ancestry.co.uk but there is a price tag of £13 for just one month.

We also look after another record that cannot be deposited with the archivist and that is the texts of monuments inside church and outside in the graveyard.  These texts give valuable information to those engaged in researching their ancestors since often they spell out relationships such as ‘the daughter of Edwin and Maria Smith’ or ‘relict of Samuel Johnson’.  They can often locate the person or family by place names and occupations, opening up new research avenues.

My experience as a former parish priest is that creating a paper record of monument inscriptions was a task that local people, not just church people, would willingly undertake.  I’m glad I wasn’t around when three not-so-young ladies levered up a heavy stone that had fallen on its face, so that they could record the inscription buried underneath!  Those who have tackled this say it is fascinating and sometimes frustrating when trying to decipher the text of the older and most weathered stones.  Many graves have no monument so typically there may be only a few hundred to record.  Next of course is transcribing the paper record to computer ready to sort and print.

Paper copies of the inscriptions with a names index have been placed in church as a resource for local people and visitors.  The civil parish got involved and deposited a copy of the cemetery records to go alongside the graveyard inscriptions as an added service for genealogists.  Experience of providing this has been positive appreciation by visitors.

To provide an on-line search facility could have required sophisticated web design however the number of entries is often small enough to take a simpler and less expensive implementation of a name search of monument inscriptions.  Create two frames side by side on a page of your parish web site, populate left side frame with a name list to monument number and the right frame populate with monument inscriptions in number order.  The trick is to create html anchors out of each monument number in the right frame contents and corresponding links by each name in the left pointing to the anchors in the right frame.  See www.thrower.org.uk/ashford/index.html a page built more than ten years ago and perhaps showing its age relative to modern design so try a later implementation at www.stpetersedensor.org then click on ‘monuments’.

The nice thing about this solution is that the dead stay where they are so updating of the web site is an infrequent task.

Getting involved with Eroica Britannia

By Revd Dr Gillian White
You may have seen information about Eroica Britannia (sub-titled the most handsome festival in the world!) which is based around Bakewell. Eroica falls with Tideswell’s Wakes week, an important part of village life in which the Church is already heavily involved. Tideswell village provides a feeding station for two of the three cycle rides taking place on the Sunday of the three day festival. We agreed this could be sited in the grounds surrounding Tideswell Church, with access to toilets and water as well as a quiet place away from traffic for cyclists to draw breath and enjoy each other's company. The Church was already open to visitors all day and bikes were added to our theme for the displays and prayer stations that would be there all through Wakes Week.

Eroica is a ride rather than a race and we found many cyclists keen to enjoy enjoy their surrounding and each other’s company. We were delighted to welcome cyclists and supporters, who came from all over the world, many of whom called into Church, talked to stewards, lit a candle, explored our ancient building. In 2014, not knowing quite what to expect, we postponed our usual morning service until the evening but in 2015, we decided to hold a more open and flexible service in the morning so visitors could drop into worship as well as explore the building. Eroica was a brilliant opportunity to work in partnership with the village community, helping to welcome and host visitors, it was also great fun and a really rewarding experience! 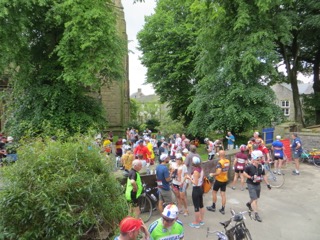