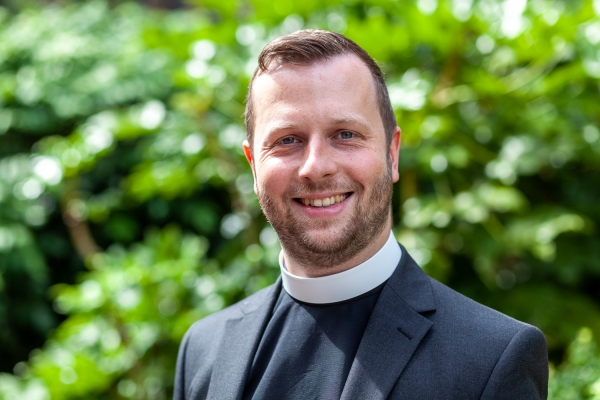 "It has been wonderful... to proclaim the Gospel, to preach regularly and to serve at the altar."

Hello, I’m the Reverend James Milwain and I am in many ways returning home to the Diocese, having grown up close to the city of Derby.

Despite moving around a fair bit in the past ten years, I still felt a calling to serve back amongst the people of this region.

My own story of faith began quite typically as a cradle Anglican, baptised as a baby and having then attended a church primary school.

After that - and I suspect again quite typically - I spent my teenage years entirely disinterested in the church! But this wasn’t to last forever.

Slowly but surely, I was drawn back into the church community. Whilst working as a graduate in the City of London, I began again to appreciate the power of sacred space and how it can inspire and lift our minds to God.

I felt that presence of the communion of saints and believers throughout the mystical Body of Christ. A new richness had been added to life!

However it was during a visit to a friend in Milan that I experienced a significant galvanisation of my calling. Stood in the Duomo, before an ornately carved crucifix, I was simply struck by the beauty of the suffering of Christ. In that moment, there was nothing more beautiful, nothing more meaningful than that singular act of sacrifice upon the cross. It was from that point on that I was set on the road to offering my life in service to Christ’s church.

It was this path towards ordination that has taken me on a fascinating and quite unpredictable journey: from working in expatriate tax as a graduate, to living in an international L’Arche community alongside people with and without disabilities, to spending three years in theological college and enjoying eight months at university with the Protestant church in Germany! Not too long ago, all of this would have come as a real surprise.

But these experiences were ultimately in service of the church and led me towards that moment when the Bishop of Derby laid on hands and invoked the Holy Spirit at Petertide this year. The ordination is perhaps best described as an occasion that manages to be joyous, awesome, astonishing and daunting all at once!

The sense of the gifts of the Holy Spirit being sent down through the intercession of Bishop Libby, in that great succession of the faithful all the way back to the Apostles, is one that will certainly never leave me.

And it must be said that the very stark emotions of ordination stick around for a while afterwards! But soon enough, having arrived at the Crooked Spire in Chesterfield, it was time to encounter a whole new set of experiences.

Those were the joys of serving as a Deacon amongst the people of the parish and discovering anew all the delights, all of the more ‘formative’ moments and everything else in-between that parish ministry offers. I can confidently say that it has been nothing but a privilege thus far!

To be a Deacon in this first year of curacy offers a great deal of variety. It has been wonderful to dive into the liturgy of the parish, to proclaim the Gospel, to preach regularly and to serve at the altar. Alongside these things has been the opportunity to meet the wider community; through occasional offices, town events and by being visible around the parish.

But perhaps the greatest privilege of being a Deacon has been the chance to meet people at different times in their lives, to represent the church, and to hopefully reveal something of God.

To visit the many wonderful people of the parish and to pray with and for them is the greatest honour. In return, the love and welcome that has been extended to me by so many people is hard to comprehend.

For those who are themselves considering ordained ministry; yes, there will be sacrifice in any calling to the ordained life, but above all a life of prayer and service is one overflowing with God’s gifts.