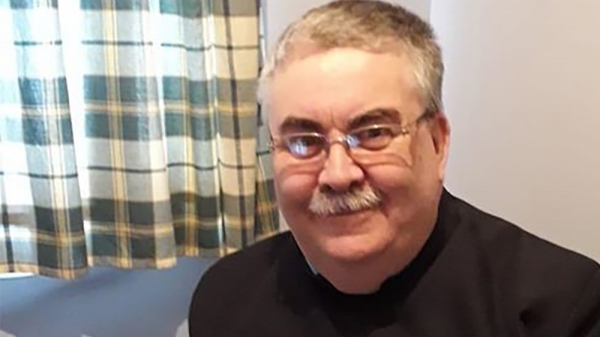 Alan Winfield: to be ordained deacon in 2020

Hi, I’m Alan Winfield, I am 62 years old and I was born in Derby and lived in what was a small village on its outskirts.

At the age of 16, I met God for the first time during an Easter Sunrise Service in the village and, as the sun rose above the mill rooftops, I had this strange and wonderful feeling inside and it was there and then that I knew.

Church took a bit of a back seat after that and it wasn’t until I met and married Sue that we started attending the local church; incidentally we will be celebrating our Ruby Wedding anniversary at the end of August – how has she put up with me for so long?

Our two sons, David and Ian, came along and our family was complete.

We moved to Devon with my job as a Funeral Director and spent four years living in Torbay before returning to Derby.

Shortly after our return my father in law passed away suddenly; the Sunday after the funeral we attended the local church and during the sermon a sentence struck me like an arrow and from there on I knew God had plans for me but just what, I didn’t know.

I joined the serving team and went on the rota of readers and intercessors butI felt though that there was something more.

I enquired about becoming a licensed reader and our priest commented on the fact that, thankfully, I had realised I was being called as it had taken me long enough to realise.

I was licensed in 2002 but still had feelings that there was something more.

In 2004, I tried for ordination and was turned down and thought that was the end of it but, as the saying goes, God works in mysterious ways and three years ago Sue suggested I try again.

This time it was to be and I am delighted to be serving in the Melbourne benefice.

In our spare time Sue and I enjoy taking our Clumber Spaniel for walks in the countryside.

I also enjoy following the work of our emergency services and have the privilege of being the chaplain to Derby Mountain Rescue Team.

During my working life and reader ministry, I have had a deep interest in pastoral care and I hope my curacy will enable me to develop this further and reach out to those in need and reveal something of the love of God.

Favourite hymn: I the Lord of sea and sky.