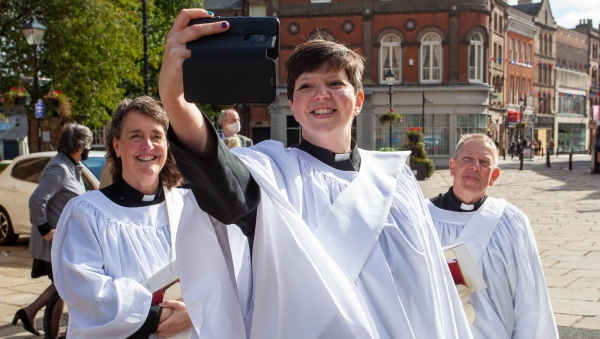 Bishop Libby has ordained eight new deacons and nine priests in the Diocese of Derby, at Derby Cathedral.

The socially distanced services took place over the weekend - ordinations were delayed this year because of the Covid-19 restrictions.

There were three ordination services on each of the two days with each candidate able to invite a limited number of guests, plus their training incumbents.

Speaking to the new priests and deacons at the start of each service, Bishop Libby said: "This may not be the service you envisaged when you first considered ordination, but this is how God has called you in this time."

And in his sermon to the new priests, the Dean of Derby, Peter Robinson, said: "God has the power the change the human heart through the death and resurrection of Jesus, so as we are called by God to lead in a time of fear and towards an unknown future our task as the church is to go through Covid-19, not to imagine that we can go around it and embrace a false hope of returning to what we recall as ‘normal’."

>> See photos from the ordination of priests on Flickr

>> See photos from the ordination of deacons on Flickr

The new curates included Alan Winfield, a funeral director, who says he met God at the age of 16 during an Easter Sunrise Service.

He said: "As the sun rose above the mill rooftops, I had this strange and wonderful feeling inside and it was there and then that I knew."

Alan has been in reader ministry since 2002 and has had a deep interest in pastoral care: "I hope my curacy will enable me to develop this further and reach out to those in need and reveal something of the love of God."

Sharon Murphy is another new deacon. The mother of eight said that God appeared to her one night in a dream: "I became a Christian in my early 20s having suffered a miscarriage.

"It was my first encounter with grief, and it was such a time of pain both physically and emotionally.

"When I woke up the next morning all the pain had gone, and I felt peaceful."

As she starts her curacy in Derwent Oak BMO, Derby, Sharon says she finds herself thinking about dwelling in a place, being, prayer walking, listening and building relationships: "My prayer is that people will see something of Christ in me the hope of glory and will want that hope for themselves."

Photographs from the ordination services

>> See photos prom the ordination of priests on Flickr

>> See photos from the ordination of deacons on Flickr

Please pray for our new deacons:

and our new priests

Sally-Anne Beecham, Rhoda Blackwell, Brenda Jackson, Elaine Jones, Dawn Knight, James Milwain, Jenn Newman, John Spreadborough and Anthony Till will be ordained priests in services at Derby Cathedral and again these can be followed online - details on the cathedral's website.

Will Eley will be ordained priest by the Bishop of Maidstone in a separate service on 11 October.