Keeping faith in the family 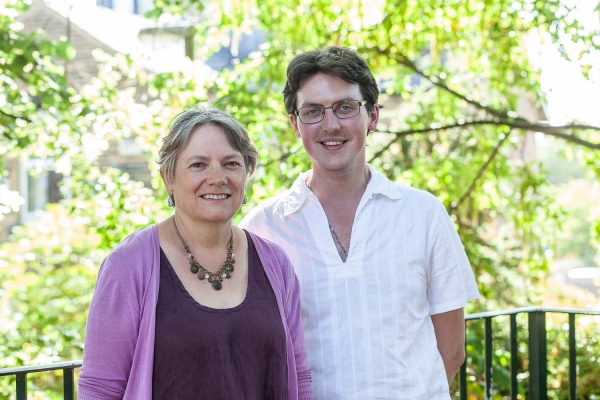 Sharon and Peter are mother-in-law and son-in-law and are both training for ordination having found their faith through entirely different paths.

Sharon Murphy would describe herself as an ordinary mum, but the way she found faith is anything but.

Although now living in Tintwistle and worshipping in St Luke’s, Whitfield, she is originally from Essex.

Her story goes back more than 30 years when, at the age of 23, she was pregnant with her third child.

“I miscarried,” Sharon says. “I was devastated and I had never felt emotional pain like it or met grief so head on as I did then.”

“Then one night, I went to bed and had a dream. In my dream I met God - and he was holding a baby. God spoke to me and told me that my baby was OK.”

For some people, that experience might have proved scary or surreal – but not for Sharon: “The next morning, my pain was gone, my grief was gone and I felt at peace. The dream was vivid and powerful and from that moment I was absolutely convinced that God is real, and I knew I had to follow Jesus.”

From that point, Sharon started going to church. She giggles and says: “My husband wondered what was going on! He had no real faith at all.”

Sharon told a friend about her experience. Her friend said that she and some other friends were Christians and had been praying for Sharon – something Sharon struggled with to some extent: “I just accepted it because I didn’t have the language at that point. But I couldn’t help but wonder why they hadn’t told me they were Christians…”

Still in her home county of Essex, Sharon found a toddler group in a church: “My second daughter, Lauren, was about 9 months old then and I pushed her in her pram for three miles to get there. But that was my connection – I was meeting Christian women of my own age and they started to tell me about reading the bible and praying… something I hadn’t thought about at all; I had no concept of either!

“It was an important moment, though. I learned that prayer gave me understanding. I could speak to God – I could tell him things and ask him questions. I found a sense of peace that comes with prayer.

“There was no worry, no anxiety; just a sense of peace and reassurance.”

Peter Jackson is 30. Born near Stoke in Staffordshire, he moved to Glossop as an infant.

“I was baptized, but not really brought up as Christian. But I was very aware. I enjoyed religious studies at school and I was fascinated by faith, but I didn’t really have one.

“There we Muslims, Sikhs and Hindus in my A-level year and I felt a sense of lack; that there was more to be explored.”

In 2006, Peter was accepted to study maths at Durham, and this was his turning point: “I went to the Freshers’ service and spoke to the chaplain – he was very good at expressing faith to students. I told him I wanted to explore the Christian faith and I was interested in meditation and more contemplative forms of prayer.”

Peter went on to serve as an acolyte (candle-bearer), sacristan (looking after church and altar furnishings) and chapel warden before being confirmed in 2008. He recalls: “Ever since then, I had the sense that I might be called to ordination, but not right then. I don’t think I was quite ready to accept it myself at that time.”

In 2013, he met Lauren – Sharon’s daughter – at a discussion group in Glossop. Peter remembers it well: “I have to confess I didn’t really notice her at first, it was more that she noticed me.

“We both shared a passion for hiking in the hills around Glossop and romance blossomed quickly. We were engaged in September 2013 and married in December 2014.

“Lauren’s faith was stronger than mine as she’d had to deal with a number of medical difficulties. She became an assistant church warden and had an inkling that she felt called to either ordained or lay ministry, too.

“But mostly she felt like it was a calling for the whole family, particularly as we were looking to adopt at the time.”

For Peter, the realization came around Easter 2016. He recalls: That’s when we had decided to consider adopting. I felt excited – a sense of it being right, of it being God’s will.

“Lauren asked me if I had considered ordination. That set me thinking and we prayed about it for a long time. All this came as a bit of a surprise and came on very quickly, but I just knew it was the right time. My calling to priesthood had come alongside our calling to adopt.”

Sharon’s decision to follow the call came almost a year later: “I was away in Poole as part of a missional community. It was about showing God to people and showing people to God. With stewarding and intercessions, I felt a bit like a shepherd. It felt like a natural progression – and I started to get a sense that God was calling.

“After that, the diocesan director of ordinands in Salisbury sent me to see a vicar, whon chatted through the criteria with me in a very practical way. And at Easter 2017, I saw Geraldine Pond (The Diocese of Derby’s director of vocations) and it was around that time that I heard God say ‘now’!

“I’ve been recommended for training and due to start at St Hild College in Yorkshire in September.

“I am really excited and really honoured – it is such a privilege to do this.”

Peter will move to the College of the Resurrection at Mirfield for three years of full-time study. He says: “I feel called to parish ministry; I’m not sure what type yet, but I’m ready to follow wherever God leads.”

They will both undertake three years of study, so it is entirely possible that mother-in-law and son-in-law could be ordained at the same time – maybe even in the same cathedral and by the same bishop.

Sharon agrees: “I think it’s great; obviously part of God’s plan and I’m thrilled for us both.

“I’m sure we’ll have lots of support from our two parishes when we are ordained – and from Lauren, who will support us both.”

Faith really does seem to run in the family.