Arts in the community 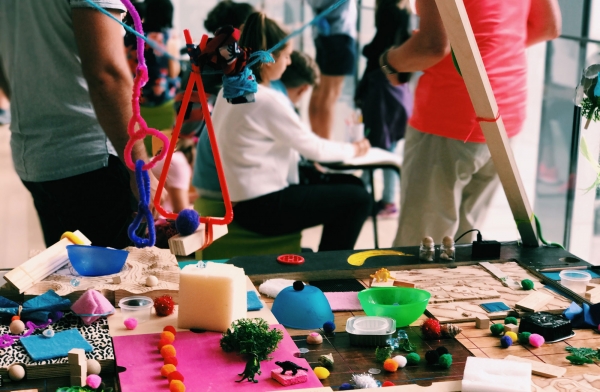 At Holy Trinity in Shirebrook, we have formed a partnership over the past four years with Junction Arts, a Chesterfield-based charity whose principal activity is the promotion and development of access and involvement in the arts through art and regeneration activity within the district of Bolsover.

We first worked together on a project to provide art and craft activities for children and young people during the school summer holiday.

Funding was also obtained to allow the town youth worker to attend and as a congregation we provided lunch for the young people who attended.

Food was donated by the local Co-op so it was a real community collaboration.  At the end of the summer, we hosted an art exhibition in church and an Awards Evening where young people received recognition for their creative work and their growth in social and other skills.

Since then we have hosted a play ‘The Great Austerity Debate’ an interactive theatre piece that toured the country, the play challenged some of the views that were held about the situations many people in poverty find themselves in.

Then came the ‘Processions’ project, which marked 100 years since some women in this country were given the vote.

We got together with women from across Bolsover District and worked together to produce a banner – not unlike the banners carried by the suffragettes.

It was such a good time of coming together as women in a community with shared experience and it also crossed some of the cultural divides we have locally as women from the Polish community also got involved.

The banner took many weeks and many hours of sewing to complete, but finally it was ready.  We travelled to London as a group and marched with women from up and down the country – there were 100 banners from 100 communities, and it was an inspiring day in all sorts of ways.

The banner is now on tour – it has been to Derby Cathedral, Chesterfield Library, Holy Trinity church, and will end its journey in September.

Our partnership with Junction Arts has allowed us to engage with our community in ways which might not have been possible given the limited resources we have as a congregation.

It has been a joy and I hope we continue a long and fruitful partnership.

I would encourage any church approached by a local art/creative foundation to grab the opportunity!