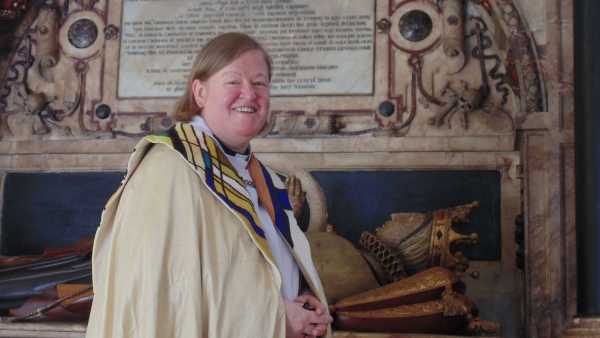 The Revd Dr Elizabeth Thomson has been appointed as Rector and Provost of St Paul’s Cathedral, Dundee, in the Diocese of Brechin in the Scottish Episcopal Church.

Elizabeth joined Derby Cathedral in 2014 as Canon Missioner and was appointed Sub-dean in 2018.

The Dean of Derby, the Very Revd Dr Peter Robinson, said: “We are delighted that Elizabeth has been selected as the new Provost of Dundee and she leaves with our thanksgiving to God for her seven years as our Canon Missioner.

"Elizabeth will be much missed here in Derby. I know that Elizabeth will in the years to come enrich the city of Dundee and the Diocese of Brechin with her many gifts, not least her creativity, capacity for outreach and pastoral insight.

"Our greetings and prayers to all in the Scottish Episcopal Church who will undoubtedly enjoy Elizabeth’s ministry in the years to come.”

Elizabeth said: “It has been a privilege to be here for seven years, working with excellent colleagues in the cathedral and the diocese and learning so much from the whole cathedral community.

"I am looking forward to new challenges in Dundee but I will be sad to say goodbye to Derby Cathedral.”

Elizabeth’s last service at Derby Cathedral will be the Cathedral Eucharist on Sunday, 6 June 2021. She will be installed in a special service in St Paul’s Cathedral, Dundee, on Saturday 19th June.

Elizabeth was a teacher of English before being ordained in 2003.

She trained for ministry at Westcott House in Cambridge and served her curacy in Somerset.

Following her curacy, she became team vicar of St Mary’s, Witney, in Oxfordshire.

She has been responsible for helping Derby Cathedral connect with the city and community, for communications, and for a wide range of duties as part of the cathedral clergy team.

During a recent vacancy, she led the cathedral as acting dean.

Elizabeth grew up in Edinburgh; she has been working her way steadily north again and is looking forward to being closer to family and friends in Scotland.

St Paul’s Cathedral, Dundee is the cathedral church of the Scottish Episcopal Diocese of Brechin.

The historical diocese dates back to circa 1150 with the cathedral then in the City of Brechin—this building has been a Church of Scotland parish church since the reformation.

The church building in Dundee, founded by Bishop Alexander Penrose Forbes, was completed in 1855 and became the cathedral church in 1905.

Scottish Episcopal cathedrals are led by a senior cleric styled ‘Provost’ rather than ‘Dean’ - in Scotland the Dean of the Diocese is a senior cleric appointed by the bishop to be a member of chapter and deputy to the bishop.