In search of Kings

Standing before my great uncle's grave in the still, silent and peaceful Gommecourt New Wood Cemetery in France, I wondered if I was the first. Was I the first member of the King family to have visited him?

Entering Gommecourt Cemetery is like stepping into a different world.

The rows of gravestones stand in perfectly straight lines as, no doubt, did the military occupants of those graves before battle commenced.

The noises and distractions of today's world are left behind and it almost seems like the whole cemetery is encased glass, such is the silence.

As far as I knew, no other family member had been there.

I had a few vague recollections of my grandmother talking about my 'grandfather's brothers' - I seemed to remember hearing there were five of them - but I never knew my grandfather, let alone his siblings.

So, following the route of countless other amateur family historians, and armed only with some basic details of my grandfather, Albert Edward, I set about finding out more. I had a few documents to help me in the form of marriage and death certificates, a few old photographs and a couple of very old mementos tucked away - one of which was a military identification badge for a "Private A King" - the other was some kind of disc bearing a four-digit number.

The first thing I needed to know was who his brothers were - and how many there had been!

Using the various search online options on Ancestry and Genes Reunited, I was soon hot on the trail of the family and its roots in Stretton (Burton), Winshill (which was then in Derbyshire), Burton and Derbyshire. That part was easy as I had some address details which I'd found on Albert Edward's marriage certificate.

The census results from 1891 and 1901 revealed much - and the size of the family surprised me: there was my great grandfather, Arthur, his wife, Sarah (neé Birch), and my grandfather - plus a whole string of Kings!  Albert, George, Arthur and John were the brothers - together with sisters Ethel and Lilly and twins Ellen and Laura!

So I summised that the "Pte A King" was either Arthur or Albert. One or both of them may have been in the army and I felt a surge of pride as I considered the possibility of a long and distinguished career for one of them. But then I also thought that perhaps they had died in service.

I 'googled' around looking for clues and came across the Commonwealth War Graves Commission website (see right) which also has a search facility. It returned 344 A Kings who had died in the Great War - too many to investigate individually!

The next step was to sort the search results. I thought, originating from Burton, one of the local regiments might narrow things down a bit - maybe Staffordshire or Yorkshire, for example.

One of the records caught my eye - a Private A King from the North Staffordshire  Regiment, service number 2432. 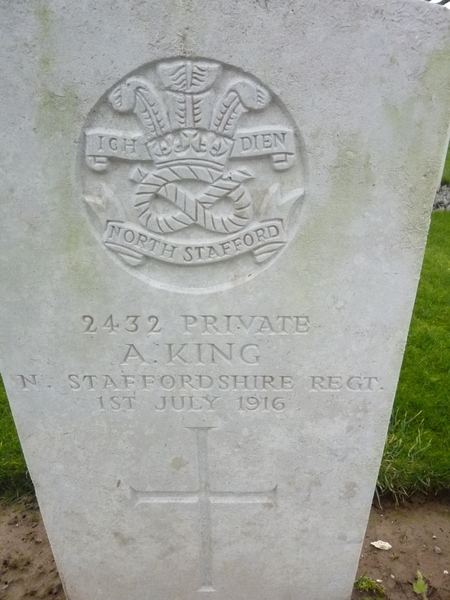 Something was familiar about that number - and I had a pretty good idea where I'd seen it before. Within moments I was frantically searching for that small, thin disc and I remember gasping "yes!" as I confirmed that the number on the disc matched the one on my computer screen.

So there he was, my great uncle. Private A King had died, age unknown. Date of death: 1st July 1916 - the very first day of the Battle of the Somme. But was he Arthur or Albert?

Age is the first clue - at the outbreak of war Albert was in his 30s; Arthur in his 20s. Also records of Albert continue beyond the war. But I can find no further trace of Arthur - so I can only assume it is he buried in the cemetery.

He was one of 2,455 British soldiers to have died on that day in the attack on Gommecourt - his division had been part of a diversionary attack, intended to distract German forces from the main offensive further south at Albert. The attack was a total and bloody failure.

A light breeze rustling the leaves of the trees added to the feeling of tranquility as I looked at my great uncle's grave for the first time. Despite the fact that I had never known him, nor known of his existence until recently, it was an emotional experience and I felt almost apologetic that we hadn't been to visit before.

I noted also a memorial to a Pte WE King. I wasn't aware of any family connection - but I quietly paid my respects to him, too, just in case.

Searching through other old documents, I found a letter to my late father from another King... this time in Southampton. He was a descendant of WE King and was sure that Pte WE and Pte A were related through a yet previous King who had divorced and remarried. He had also, kindly, sent my father a photograph of the gravestone of Pte A which he had taken whilst visiting Pte WE!

I have yet to search for any further evidence of the two being related - but the letter and photograph at least answered one question: I wasn't the first - and I hope I won't be the last.