Serious fire at Mackworth All Saints 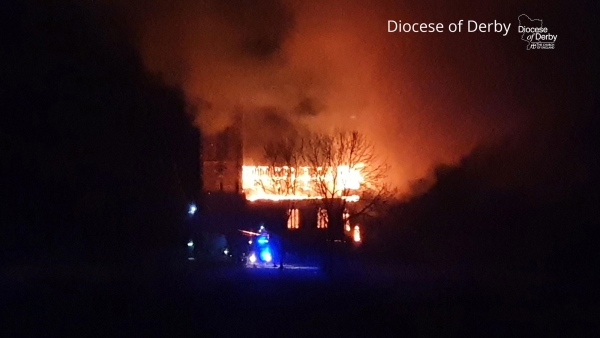 Fire crews have been fighting a serious fire at Mackworth All Saints church.

The alarm was raised just after 4.30pm on Thursday (3 December).

Mackworth All Saints, dating from the 12th century, lies to the north of the A52 road at the bottom of Church Lane.

Speaking from the scene, the vicar, Revd Jacqueline Stober, said: "It's a terrible scene and we don't yet know the full extent of the damage.

"I got a call from a churchwarden to say there was a fire and as I drove to the church I could see smoke and a glow on the horizon so I knew is was bad.

"This is horrible for all the congregation and for those who have looked after this church for many years - some have put their heart and soul into it."

The Right Revd Libby Lane, Bishop of Derby, said: “With the congregations and community of Mackworth, I am shocked and deeply saddened by the fire at this beautiful building.

“This church has stood as a witness in this place to the Good News of Christ for centuries, and in the midst of our grief for this loss we remember that Jesus, who has been worshipped in that church for so long, is still with us even in the midst of this disaster.

“We are grateful for the courage of those who fought the fire and my thoughts and prayers are with them and all those affected.”

The present building was largely built in the 14th and 15th centuries, with additions in the 19th century and Derbyshire alabaster featuring prominently in the interior decoration.

The beauty of its setting has made it popular for weddings.