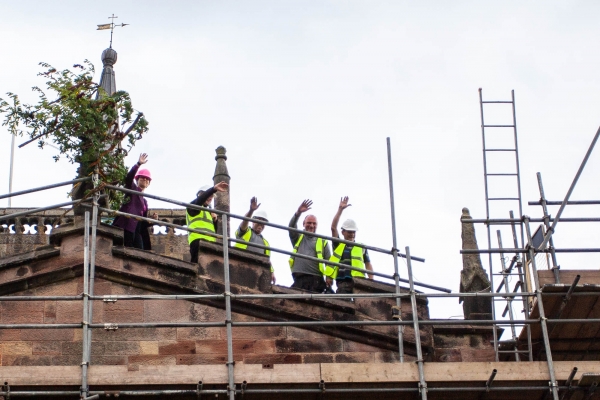 Where would you find a rector, a bishop, builders and t’owd men?

St Mary’s Wirksworth has held a topping out ceremony to mark the completion of work to re-roof the nave.

A number of people involved in the project looked on as a bough of oak, a symbol of resilience and strength, was hoisted onto the roof, after which Revd David Truby and Bishop Libby climbed ladders to the top of the nave to give a blessing. They were joined on the roof by some of the builders and roofers who had worked on the project over the past months.

“The lead had been on the roof for nearly 100 years,” said Revd David Truby, the rector of Wirksworth. “It was last done in 1926 and, because of the action of the weather, it was cracking and leaking,”

The project was funded by the National Lottery Heritage Fund to the tune of £120,000 – around 60% of the total cost. Generous local businesses, fundraising events and crowdfunding also contributed – although there is still more fundraising to be done to allow the two transepts to also be re-roofed.

Once back on the ground, Bishop Libby said: “To see how much craft goes into the restoration of a roof like this, using techniques that have been around for centuries, and the wonderful way in which the lead that had been there for a century was able to be removed and reused is amazing.

“There is something very beautiful and deeply theological about the way that God is able to re-cast the things that are part of our inheritance and our treasure into something that is now fit for purpose for the next century.

“Christ’s people here in Wirksworth have not been constrained or tied to this building – however beautiful and precious it may be – they have been the church of God when they’ve not had access to the building, continuing to worship and pray and learn and to serve their neighbours.”

Among the onlookers were two parishioners dressed as t’owd men. Inside the church, T’owd Man is an ancient carving of a lead miner, as Wirksworth had historically been an important centre for lead trade. 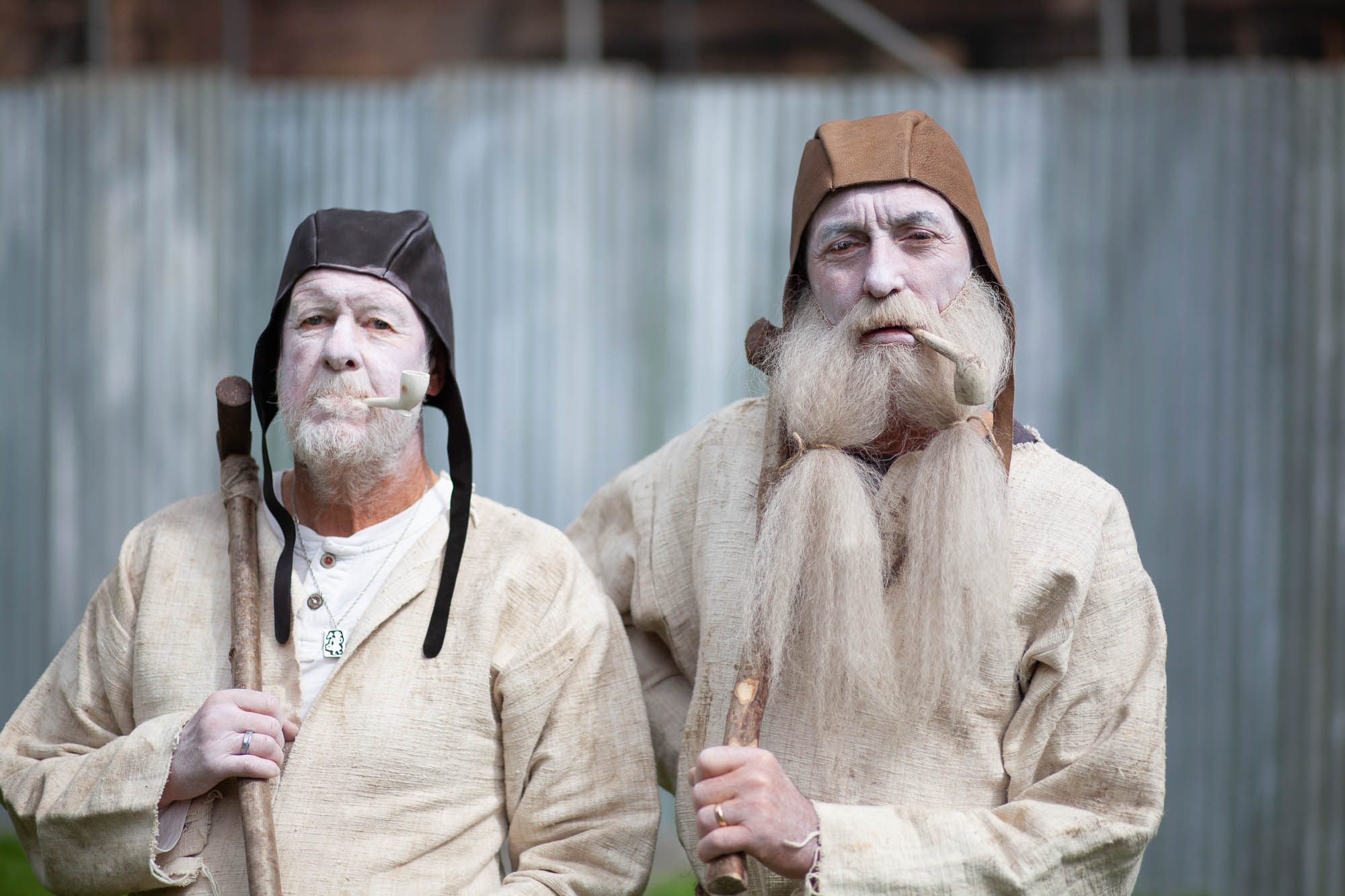 The oak bough that was lifted onto the roof for the ceremony also carried representations of Wirksworth’s past, being adorned with Wirksworth Red Tape – a tape manufactured in the town and used around the world to tie up bureaucratic papers (hence the term, bureaucratic red tape).

David Truby said that the Lottery funding was conditional on the church finding ways of engaging with the local community in new ways. So, originally, they had planned to take people up the scaffold during the work: “Unfortunately, because of the Covid-19 restrictions, we weren’t able to do that so we did a virtual tower tour. That meant me going up onto the roof and doing the tour via Zoom, relaying it out to people wherever they were.”

Bishop Libby said she had also been keen to see the roof work for herself: “When David first told me the plans for today, they didn’t include me going up to the roof and I was a little disappointed.

“But I was delighted when I arrived to learn that they were expecting me to go up.

“The first ladder, from the ground to the first platform, is quite long and a bit shaky, so I was given very clear instructions to maintain three points of contact at all times.

“But it was absolutely fine and the view at the top is amazing!” 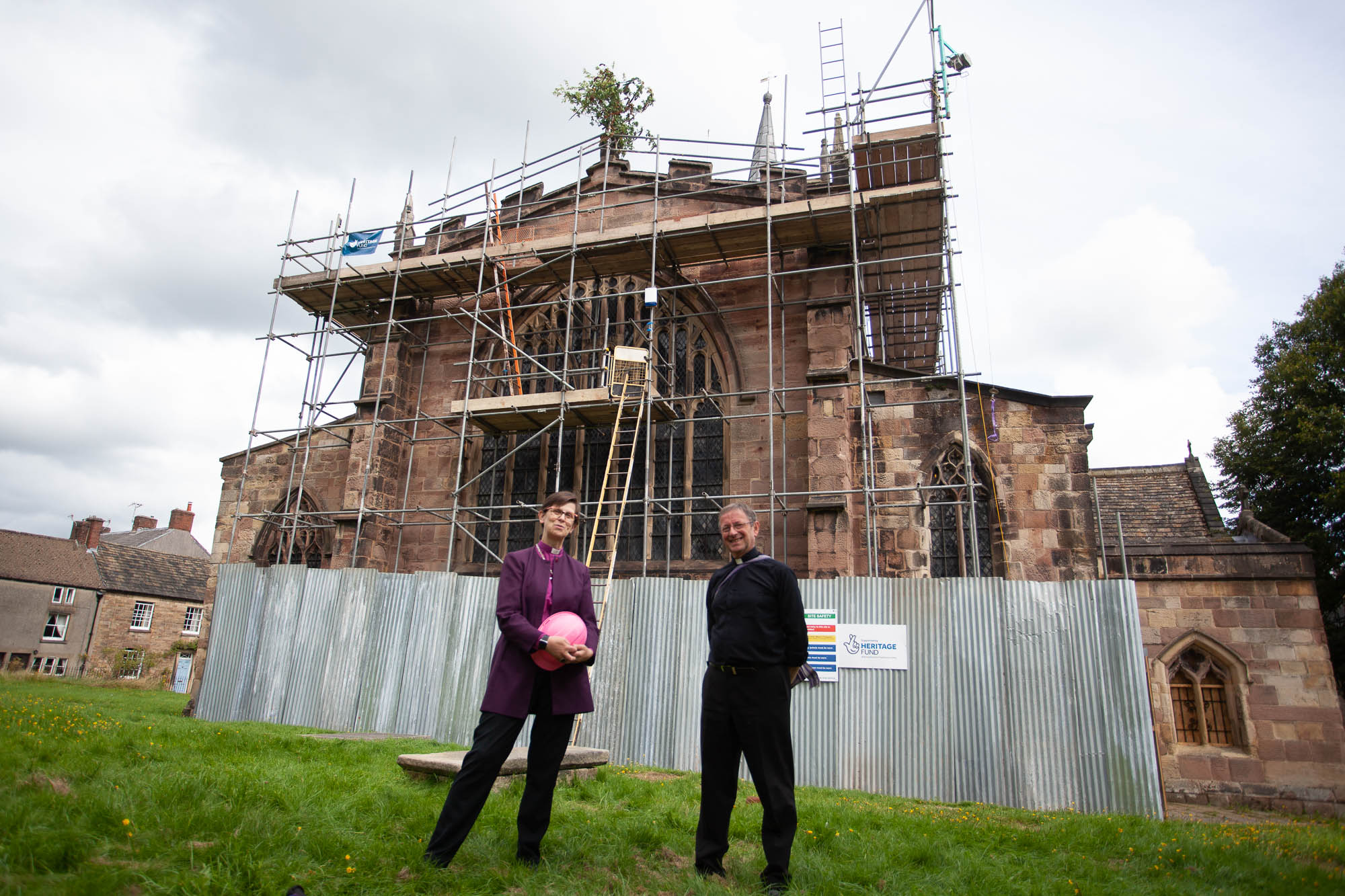 Advent resources during the pandemic

Some church buildings may be closed, but there are plenty of online services to enjoy. Read More

The latest from the Diocese of Derby during the coronavirus pandemic. Read More