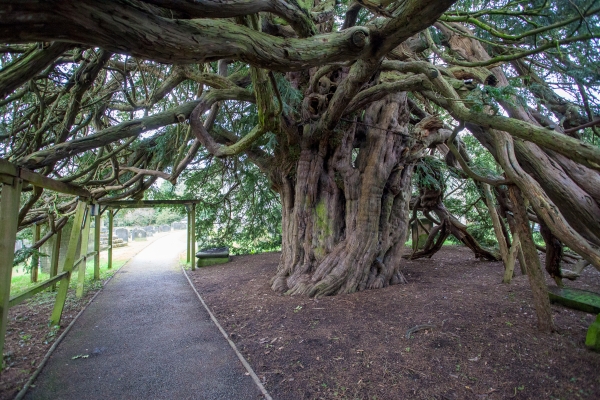 An ancient tree by St Cuthbert’s Church, Doveridge, holds stories of the parishioners, its visitors and England’s most famous outlaw.

Every parish has a wonderful history behind it – though there are few that can claim to be part of a genuinely world-renowned legend.

But the parish of Doveridge certainly can.

Nestled on the western edge of the Diocese, and overlooking the River Dove, the Grade 1 listed St Cuthbert’s Church is traceable back to the Domesday Book of 1086.

Much of the architecture is from the 13th Century but there are also some rather nice Norman remnants on show.

Even older is the churchyard’s yew tree, thought to date back 1,400 years and with branches that spread to give a circumference of some 250 feet.

Such an ancient tree will doubtless have plenty of tales to tell.

It will have seen the arrival of the current vicar, the Revd John Vickerstaff, 13 years ago - as well as the 1,650 or so inhabitants of the parish and many of their ancestors.

Forming a formidable archway over the footpath to the church, it will have greeted each and every visitor for generations, witnessing countless services of worship.

The yew would have watched over the church’s restoration in the 1860s, the updating of the church organ just a few years ago – and everything in between.

It has enjoyed a front-row seat to the local Mulberry Theatre Company’s rehearsals of their annual pantomimes in the church’s Octagon extension and seen youngsters at the playgroup embark on their lifelong journey of discovery.

It will also know that congregation numbers for special occasions are definitely worth celebrating. 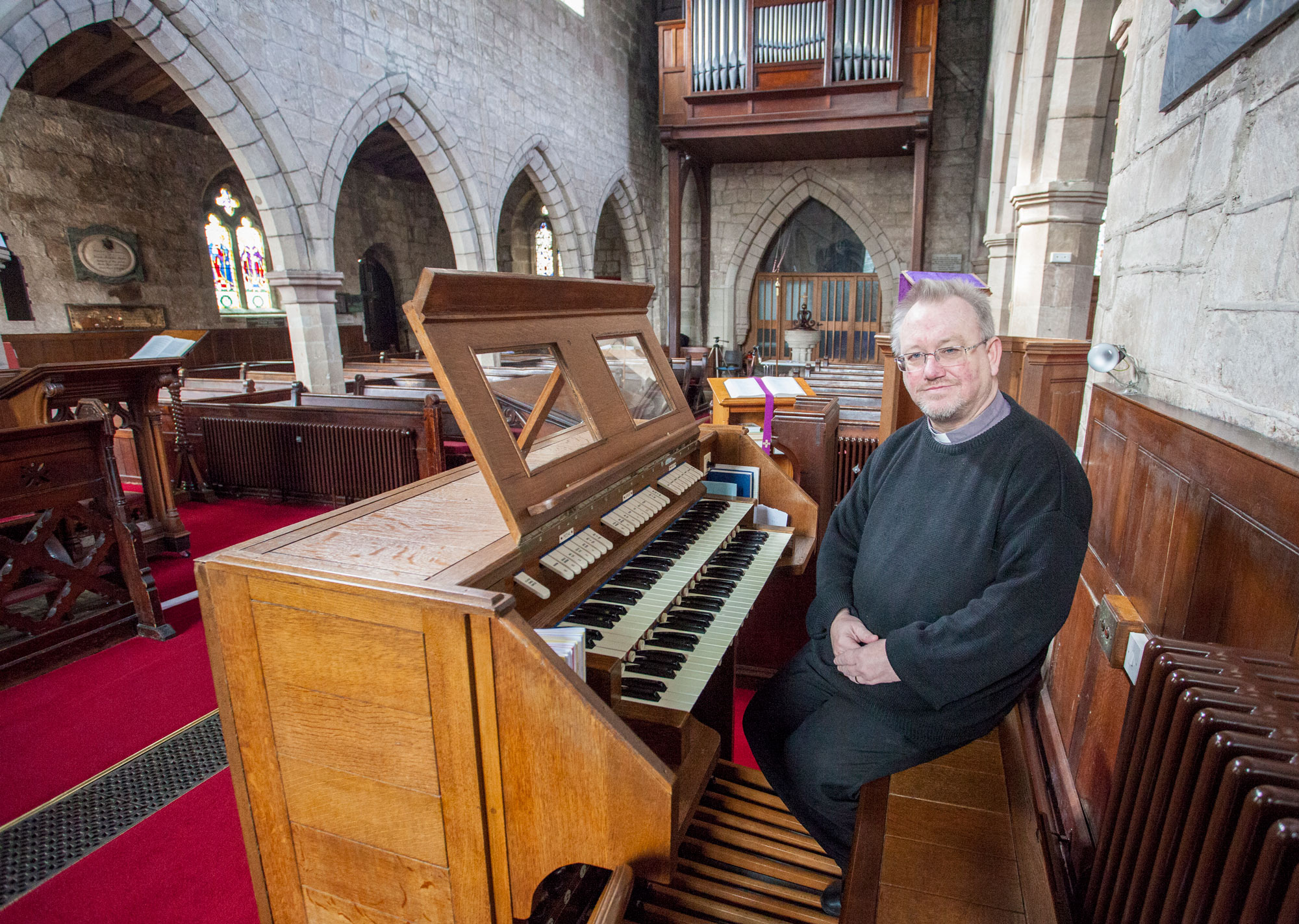 “At Easter, Christmas, Mothering Sunday and for harvest, it’s full to the brim,” says John. “People really do come out in force on those occasions. The atmosphere is wonderful!

“We also have a truly successful Gift weekend each July. It’s been a tradition for years.”

Last year, whilst its needle-like leaves enjoyed the summer sun, the yew will have surveyed the Gift event as it brought in close to £10,000, which was distributed between local and national charities and the church’s fabric fund.

Whilst the village’s population has been fairly constant for a while, the yew will soon see the number of inhabitants grow dramatically. New housing developments are planned, and John says the church is already talking about how to reach out to its new parishioners.

“We have a great PCC and a really good team of people who go out and deliver welcome packs to people who move here.

“But with so many new houses in the pipeline, engaging with them and making an impact will be a challenge.  We need to give that some serious thought.”

The yew will greet them sometime in the future – but for now it has regular visitors from overseas to welcome.

Not that there is an abundance of them in Doveridge – but local industry is a good source.

“JCB is only a few miles away. They receive a good number of Chinese guests and they often bus them here.

“Whilst they are visiting, they like to come along to what they see as a typical English church. They are usually very excited to look around, explore, and take photos of the church – and the tree.”

But when it comes to tourism, Doveridge is the stuff that legends are made of – a legend that attracts a good number of visitors by itself.

Part of the legend stems from the fact that Doveridge is just a few miles away from the Staffordshire village of Loxley – which some believe is the birthplace of Robin Hood.

If Loxley is home to one of the legendary character’s life events, then Dubbridge, as it was once known, is host to another.

The yew was once part of Sherwood Forest, which centuries ago covered areas across Derbyshire and into mid Staffordshire.

The story goes, according to a minstrel’s ballad, that ‘Bold Robin’ and a woman called Clorinda, Queen of the Shepherds (who some believe was Maid Marion by another name), were married under the vast canopy of the great yew, on 15 August, sometime during the reign of Henry III.

The ceremony followed a feast at Tutbury Castle and was conducted by ‘Sir Roger’, the parson of Doveridge.

Being a historian, the Revd John Vickerstaff says the wording holds a clue: “The word ‘Sir’ being used as the parson’s title dates it to the 14th Century.

“But that’s a bit before the time of the popular version of the character.”

Did the Robin Hood and his beloved Maid Marion really marry in the greenwood, next to the 22-foot girth of the tree’s trunk, with minstrels playing and the Merry Men in attendance?

If so, then St Cuthbert’s yew is the only living witness to that particular piece of history.

Many would scoff at the very idea: so many more would wish it were true.

Only the yew knows for sure – and it hasn’t given up any of its secrets yet. 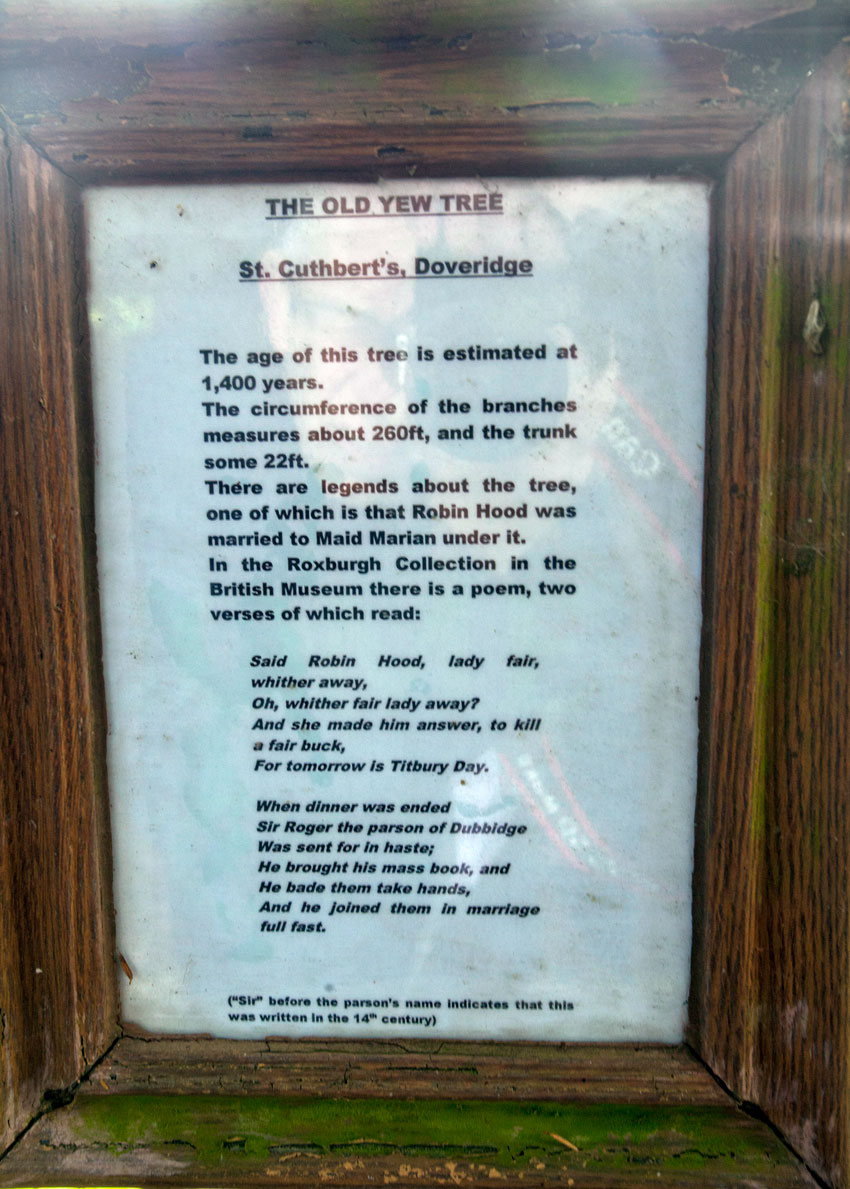