To the cross and beyond 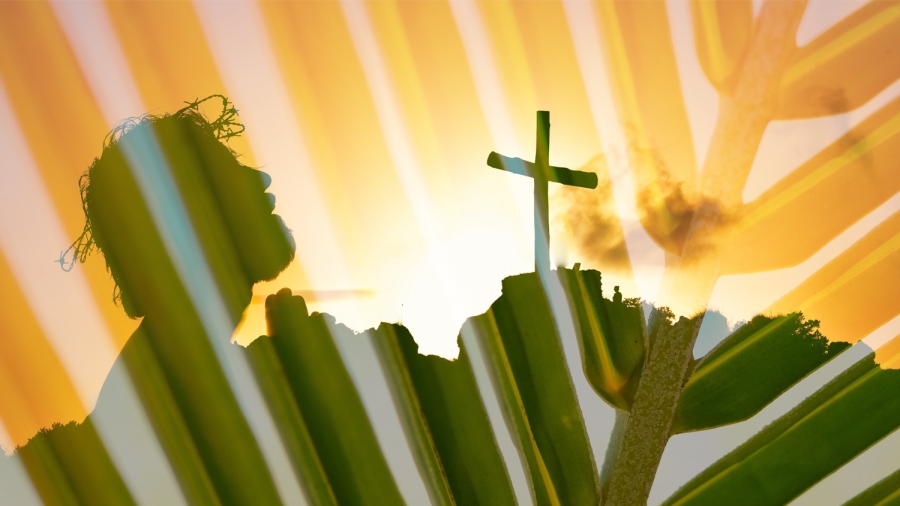 What do we look for in a leader amidst the violence, anguish and confusion of our world today?

Or would we welcome anyone who might make things a little better?

Perhaps this is how it was for the crowds of Jewish pilgrims who travelled the difficult desert road up from Jericho to Jerusalem, shortly before Passover so many years ago.

From the top of the Mount of Olives, they would have gained their first glimpse of the ‘City of Peace’.

Thankfulness and awe would have welled up from deep in their hearts as they began to sing the great pilgrim psalms of praise and victory.

Then suddenly a man appeared amongst them on the road.

Some said he was a wise teacher from Galilee in the north, a miracle-worker and healer; some said he was the Messiah, a long-awaited liberator who would drive out the Romans and make Israel great again.

Others claimed he was a peace-maker, riding a young donkey in fulfilment of ancient prophecies.

Some said he was Jesus, the one who saves.

Crowds hacked palm branches from the trees, waving and crying out in welcome.

Some spread their cloaks on the road for him to ride over. Excitement mounted. What was going to happen?

Hopes were soon dashed. This was no glorious liberation or victory.

Apparently the man was just another trouble-maker with no respect for Law or Temple.

A quick arrest and trial; another miserable cross on Golgotha…

Who was this Jesus? Many today are still asking the same question, drawn by his compelling journey to the cross - and beyond.

As Christians, on Maundy Thursday we remember Jesus ‘new commandment’ to love one another as he has loved us, and we commemorate the institution of the Lord's supper.

Additionally in some churches on Maundy Thursday, in memory of Christ’s action at the Last Supper, foot washing takes place.

I’ve been reflecting on John’s recounting of Peter’s reaction to Jesus approaching him to wash his feet, what it says about him, and the example he presents to us.

Because I sometimes wonder if Peter gets a bad press – often he’s thought of as someone who speaks hastily, without really thinking about what he is saying.

But I often reflect that even in those moments of speaking hastily he reveals a heart that, though it may not always have understood, revered and deeply loved Jesus.

And the same is true in this instance.

Foot washing was the job of the lowliest person in the room.

So naturally for Peter the idea of Jesus undertaking this role would be unthinkable - Jesus was his Lord, not his servant. So he argues.

But when Jesus replies that the alternative is for Peter to have no share with him, Peter immediately wants to be completely washed by Jesus - not just his feet.

His love and strength of desire for relationship with Christ shine through his reply.

Though he perhaps didn’t realise it at the time, Peter desired what was accomplished on the cross. A complete washing away of his sin.

Foot washing is an intimate action.

It is possible to feel quite vulnerable when someone washes your feet.

And I wonder what my reaction would be if Christ had approached me as he approached Peter that day.

I hope that it would resemble the strength of honour and love that Peter showed:  ‘Lord, not my feet only…’

What do we do when our prayers have gone unanswered, our hopes have been left hanging and our dreams are dry and withering?

Jesus’ disciples had to face this very challenge on the day that they saw their saviour hanging on a cross dying.

He was supposed to save them.

He was supposed to set them free.

He was supposed to fulfill the promise long waited for.

They had given up everything to follow him because they believed that he was the one.

He had healed, spoken and loved like no man they had ever seen.

And hadn’t they seen him stand alongside Elijah and Moses? Robed in white as though heaven was touching earth?

How could they have fallen so far in such a short space of time?

How could things have gone so wrong?

The thing is… they couldn’t have known the hope that was embedded in the cross.

They couldn’t have known the healing that this one action would release.

They had no clue that this moment of incredible loss would lead to freedom for all creation.

They just needed to look beyond their moment to see that God had a larger salvation than they could have possibly imagined.

They needed to see past their own lives to see that their land, their people weren’t the only ones that needed to be set free.

They needed to extend their vision to see that promises are always fulfilled… in God’s time.

But it is hard, and we are tired.

When our prayers go unanswered, we can become so transfixed in this moment that we forget to remember that God is eternal. We can hang all our hopes on such fragile things, forgetting that God holds the whole universe in his hands, and we can trust him to hold our lives there too.

And, when our dreams die, as they sometimes do. We forget to ask God to give us new dreams. Dreams bigger than this moment, bigger than our own land our own ‘world’. Dreams that will go beyond our time and reach into eternity.

Good Friday is good because it isn’t the end.

Let us hold on to the hope that wherever we are in this moment, it isn’t the end but the beginning.

The experience of the past two years of Covid, and now of the Russian invasion of Ukraine, causing terrible suffering there and repercussions for people across the globe, have changed the atmosphere of our lives and of our time.

It is harder for people to be optimistic.

People are tired, anxious, and fearful.

On the positive side, there is much kindness and sympathy for those at the sharp end.

Offers of hospitality to refugees, donations given and sent – all this follows hard on the heels of the dedication of so many key workers, so much appreciated in the thick of the pandemic.

If we are to win through in these times, it will be because of love.

In 1930 Russian communist leader Nikolai Ivanovich Bukharin, one of the most feared and powerful men of his time, travelled from Moscow to Kyiv to promote the atheist teaching of his party.

Speaking to a large crowd he heaped as many insults as he could upon the Church and the Christian faith.

He appealed to the people of Kyiv to reject Christ, and embrace atheism.

At the end of the meeting the local parish priest stood and calmly dismissed the crowd with the usual Orthodox easter greeting - Christ is Risen!

The crowd thundered back in response – ‘He is risen indeed – Alleluia!’

Russian Orthodox have looked to Kyiv as the origin of their faith, since in 988AD Vladimir the Great, whose sculpture stands outside the Kremlin, was baptised there, leading to the majority of the Russian and Slavic peoples turning to Christ.

I am sure he has wept for Kyiv.

At this new turning point, perhaps, in world history, we must look to Jesus who by the cross faced down the powers of darkness, violence and evil, suffering apparent defeat, before rising to victory, ‘disarming the principalities and powers’. (Colossians 2.15)

How did he do this?

By faithfulness to God, by humble service, by costly self sacrifice, by love.

Our thoughts this Easter must be with those traumatised by violence and evil, and our faith, hope, and love turned into prayer and action that can change the world.

Remember, the same power that raised Jesus from the dead is at work in us.